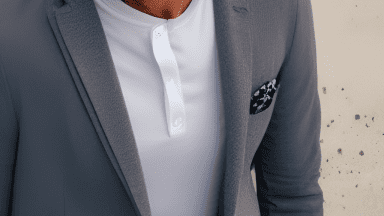 We know that it can be difficult to style a henley shirt, but we’ve put together some inspiration to help you out. Whether you’re going for a casual or more professional look, these 13 pieces will show you how to wear a henley with a blazer.

After I looked at hundreds of different color combinations and styles that work together, here are my biggest takeaways.

White henley shirts look good under most colors and styles of blazers. You can tuck them in or leave them untucked.

You can style a henley shirt in many ways depending on the look you’re going for. If you want something more professional, button up all of the buttons. Or, if you’re aiming for a more casual appearance, leave one or more of the buttons undone.

A dark henley shirt may be paired with a light blazer and still look fashionable. Prior to this, I would have thought otherwise, but it is possible. For example, matching a black henley with a grey blazer can work well together.

Here are some of our favorite ways to style a henley shirt with a blazer. Try out these looks.

When it comes to dressing down a blazer, denim jeans are a great option. For a casual but put-together look, try pairing a blue blazer with a white henley and black jeans. Add some brown loafers or boots to complete the outfit.

A light grey blazer is a great addition to any man’s wardrobe. It can be worn in many different ways, and it even looks good with a black henley shirt. The combination of textures and colors will make you stand out from the crowd. I never thought this combination would work before diving into the images, but this works.

I feel like a brown blazer can go with so many different things. For example, you could wear it with a white henley shirt and black pants. It looks really sharp and put together. Plus, it would be comfortable and perfect for the fall weather.

A royal blue blazer is a great way to add a pop of color to an otherwise bland outfit, and it can be paired with a wide variety of tops. A white henley shirt is a great option because it’s both comfortable and stylish.

This dark blue henley shirt looks great with a textured grey blazer. For a complete look, add some brown dress shoes, a brown belt, and black pants. This could be considered a professional look you can wear to work or to an event. This is a great example of pairing darker and lighter color combinations.

Tan and beige work well with blue. You can rock the beige henley shirt with the dark navy blue blazer to give good contrast and pair that with the grey pants. For a more casual look, keep the henley untucked in the pants.

If you’re going to dress down your blazer with a henley underneath, then you can also wear a blazer that has some extra detail and style. Take a look at this wide lapel blazer with some lining and texture to the jacket. This adds some more detail but isn’t overpowered by the collar and buttons of the dress shirt underneath. Rock it unbuttoned to keep it flash and casual.

I wanted to add some colored henley options to see that it’s till possible to achieve a stylish fashionable look without resorting to the white henley. Check out this baby blue henley with a grey blazer over top. Pair this with black pants and it looks great.

Orange doesn’t look the best on me, but this is a different, more casual style of pairing the white henley with an orange blazer and some grey chino pants for a casual spring look. I don’t know that I would go out and buy an orange blazer because they are the most versatile piece to a wardrobe, but this can look pretty refreshing.

Classic casual colors with brown, white, and blue. This brown blazer with a buttoned-up white henley works with dark blue jeans and some brown boots or shoes.

This is a thinner henley, it even looks like it could possibly be a knitted fabric or a linen henley shirt combined with black pants and a wool blazer. This is definitely more casual, but I could see this working for a day in the office as well.

The royal blue henley, unbuttoned, looks pretty decent with the light beige blazer, tucked into black jeans. I would definitely crop the jeans and wear low-cut black loafers or dress shoes to finish this off. This is not the most conventional color pairing, but it still looks good.

The blue-on-blue henley with blazer look seems to work here as well. I would note that the henley shirt is a different shade of blue and has a completely different texture with white speckled in. This is what makes it work.

Can you wear a Henley with a blazer?

Yes, you can absolutely wear a henley with a blazer. As a tip, keep it buttoned up for a more professional look, and you can unbutton the henley for a more casual style. You can’t go wrong with a white henley, but you can even play around with color combinations. Some colors that can work are blue and tan, blue and grey, black and grey, blue and blue, and more.

What can I wear a Henley with?

Can a Henley be business casual?

Henleys are not typically formal, but you can dress them up with a blazer or other professional clothing to make them more formal. Even with a blazer, a henley is more on the casual side, so definitely keep that in mind depending on what event you are going to. It’s a very formal event, do not wear a henley.

What to wear with